Delivering on fun, storytelling and authenticity, WWE 2K19 will showcase a massive roster of popular WWE Superstars, Legends and Hall of Famers, as well as NXT and 205 Live favorites. Players will experience engaging WWE gameplay and match types, extensive creation options, fan-favorite modes and much more.

WWE 2K19 will feature numerous key gameplay improvements, including a vastly improved striking system, improved AI and introduction of the Payback System, a multi-tiered and defensive-based gameplay system used to help turn the momentum of the match and add to the drama encountered in the ring.  In addition, the game’s frame rate, overall responsiveness and animations have been improved to tighten up the in-ring action. WWE 2K19 also introduces new five-person match type variations, a re-envisioned Hell in a Cell match and major improvements to both Steel Cage and Money In The Bank matches.

MASSIVE PLAYABLE ROSTER
Featuring more than 200 playable Superstars, the WWE 2K19 roster is the biggest yet and loaded with your favorite WWE, NXT and 205 Live Superstars, Legends and Hall of Famers. Players can embrace the WWE Superstars of today, such as AJ Styles, Brock Lesnar, Seth Rollins, Braun Strowman or Shinsuke Nakamura; rising stars in NXT like Aleister Black, Johnny Gargano, Velveteen Dream and the Undisputed Era; as well as legendary competitors like Stone Cold Steve Austin, Dwayne “The Rock” Johnson, André the Giant and more.

MyCAREER
For the first time in WWE 2K history, MyCAREER will mirror the reality of many WWE Superstars’ careers in WWE 2K19 by starting a created MyPLAYER on the independent wrestling scene and trying to make it to WWE. This year’s MyCAREER features more than 1000 lines of voiceover from 26 different WWE Superstars across 200 cutscenes. In addition, the mode delivers on approximately 12 hours of playing time, including brand new environments and arenas that bring an authenticity to MyCAREER like never before.

NEW MODE: 2K TOWERS
Take a WWE Superstar or created MyPLAYER into one of 20 different towers, each with a unique gauntlet of matches that boasts different challenges, match stipulations and player modifications presented in ways players have never seen before in WWE 2K games.

CREATION SUITE
The WWE 2K19 Creation Suite contains many new additions and improvements, including the addition of creating a custom Money in the Bank briefcase to changes in Create-a-Superstar, Create-an-Arena, Create-a-Championship and more!

UNIVERSE MODE
The mode continues its expansion on previous years. Players will see improvements to the Championship system, where the number of championship slots per show has increased from four to six; the addition of Superstar Save Profiles; support for both Managers and Custom Matches; and new promo animations. In addition, players can now assign Money in the Bank matches to show schedules or create their own custom Money in the Bank scenario. 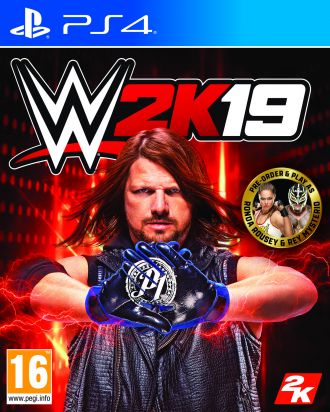