For many centuries, the planet of Luteus Alpha has been producing much-needed material for the wars raging on in the Armageddon sector. Many are drawn to the planet, and so is the great Warboss Ogruk Gutrekka. Upon arriving on the planet, Gutrekka took your most precious hair squig. Filled with vengeance you’ve sworn to do anything it takes to return your hair squig, and prove who is the strongest!

Warhammer 40,000: Shootas, Blood & Teef is a hand-drawn 2D action-adventure taking you on a wild ride full of intense action, funny one-liners and tons of explosions!  Fight your way through the hive city of Luteus Prime in single-player mode or as a party of up to 4 battle-hardened Orks in online or local co-op. Pick your class, grab your weapons and get ready to battle Humans, Orks and Genestealer cultists, to ultimately retrieve your luscious hair squig from the hands of the Warboss Gutrekka! Who’s ready for Waaagh!? 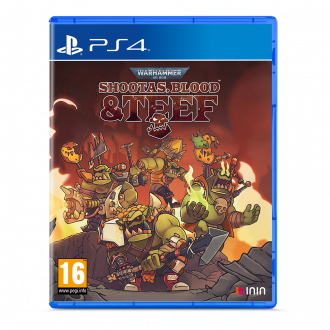