PES 2019 will feature seven new fully licensed leagues, with seven confirmed and two more to be announced at a later date.

KONAMI is especially thrilled to have signed the rights for the Russian Premier Liga exclusively, making PES 2019 the only football
game on the market where fans can have access to the entire league featuring top clubs such as CSKA Moscow, Zenit St Petersburg and Spartak Moscow.

With the latest PES instalment being made available on 4K HDR across all platforms as well as the use of ‘Enlighten’ software for true-to-life
visual effects and real time ‘Global Illumination’ lighting and shadows, PES 2019 will offer fans improved in-game graphics.

This means better crowd detail, real grass textures and the return of the incredibly popular snow weather effect making those matches in Moscow even more realistic!

“Announcing seven new, official football leagues for PES 2019 is a clear sign that we are committed to giving fans more of what they want – more licensed content,” commented Jonas Lygaard, Senior Director for Brand and Business Development at Konami Digital Entertainment B.V.
“We are more confident than ever in the direction the franchise is headed and this is just one of many steps we are taking to elevate PES to new heights.
We continue to believe in the Power of Football and PES 2019 will be our most powerful game yet featuring more fully licensed leagues and clubs than ever before.”

Player individuality has also been taken to the next level, where skills and strengths are more prominent in impact and motion during gameplay.
Dribbling animation and fluidity is now based on variety of factors, such as player and ball positioning along the defensive line, precise feint movements to surpass around the sides and awareness of the close proximity of the opposition while turning.

New shooting mechanics with unique varied animations have been introduced, including motion of the ball slipping past the goalkeeper's outstretched hands, reactions of the attacker who just slighlty missed and more intense/joyful reactions around the goal area.

A significant introduction is Visible Fatigue, which is a reworked, rebalanced stamina system. Players will give clear visual indications when they are tired, with their stamina level impacting how they play. How you manage players during a match and when you make substitutions could be the difference between winning or losing.

Quick substitutions will be available when the ball goes out of play. A simple button press will give you recommended changes based on stamina and position. No need to interupt the gameplay during a tense match!

Improvements have been made to make the movement of the ball more natural and varied. The trajectory of the ball is now based on posture and how the ball was kicked. Also, situations like the ball bouncing off the goalkeeper's body or hitting a defender during a block have more realistic outcomes.

Full body touch introduced last year has been further enhanced. How the ball is controlled depends more on the surrounding situation, allowing for smoother and contexual trapping of the ball.

Enlighten software has been used to rework lighting, both natural and stadium based. Stands and pitches will closely mirror their real life counterparts depending on the time of day, bringing a more realistic look and feel to PES 2019.

Snow weather effects have been added. Not only will snow appear in the game, it will also affect gameplay. You will need to plan your strategy and make key choices based on the weather.

The crowd has more details and animations added. Also, you will now be able to hear the excitement from the crowd throughout the stadium like never before!

By focusing on the lastest platforms, a dynamic resolution system has been implemented. See all the on-pitch with more detail and clarity.

(Copyright in the Enlighten is owned by or licensed to Geomerics Limited.)

Take part in the International Champions Cup before the season begins. Find your best 11, determine your strategy and finalise your tactics for the new campaign.

Improved negotiation system and budget management. Added a re-sell and clean sheet options so that strategy is needed not only on the pitch but also with club management. 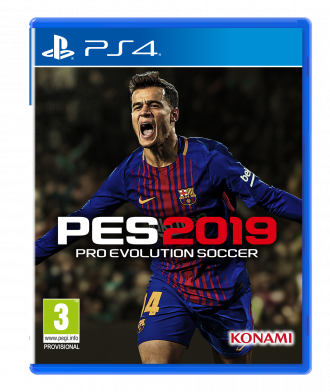