Borderlands®: Game of the Year Edition: The co-op shooter-looter that started it all, crammed with content and enhancements. Equip bazillions of guns as one of four trigger-happy mercenaries, each with unique RPG skills. Take on the lawless desolate planet Pandora in pursuit of powerful alien technology: The Vault;

Borderlands® 2: Play as one of six Vault Hunters attempting to liberate Pandora from evil mastermind and corporate CEO Handsome Jack. Make new friends, arm them with a bazillion weapons and fight alongside them in a relentless quest for revenge and redemption;

Borderlands®: The Pre-Sequel: Play as six all-new character classes while carving a path of destructive mayhem across Pandora’s never-before-seen low-gravity moonscapes with all new moves, weapons, and vehicles! Fight alongside future megalomaniacal tyrant Handsome Jack, while preventing the destruction of Pandora and its moon;

Play all three games on the go with friends: Each features local two-player split-screen co-op play and support for up to four players online;

The physical game contains an 8GB cartridge that features Borderlands: Game of the Year Edition, with a 6.6GB download required. For Borderlands 2 and Borderlands: The Pre-Sequel a 35GB download is required 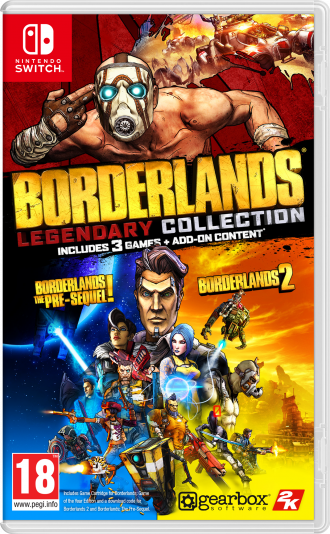