BioShock® Remastered: Winner of the BAFTA Gaming Awards’ Best Game in 2007, players can now experience the critically acclaimed and remastered BioShock experience on Nintendo Switch. Explore the undersea city of Rapture, a haven for society’s greatest minds that has devolved into a dystopian nightmare wrought by one man’s hubris. Add-on content from BioShock Remastered is also included, featuring the ‘Museum of Orphaned Concepts,’ a guided in-game gallery of discarded or reworked development concepts from the making of BioShock, ‘Challenge Rooms,’ a series of areas that test the player’s puzzle-solving and combat abilities, and Director’s Commentary tied to collectibles that unlock 10 episodes of ‘Imagining BioShock’ featuring original series creators Ken Levine and Shawn Robertson;

BioShock® 2 Remastered: Eight years have passed since the events of the first BioShock, and Rapture’s denizens have rallied into a collectivist cult. See the undersea city of Rapture through the eyes of a fearsome guardian known as a Big Daddy, racing against the clock to find a missing girl hidden somewhere in the treacherous ruins. Add-on content from BioShock 2 Remastered is included, featuring the add-on campaign ‘Minerva’s Den’ and the combat-centric gauntlets of ‘The Protector Trials’;

BioShock® Infinite: The Complete Edition: In the third installment of the BioShock series, players will travel to the flying city of Columbia to rescue Elizabeth, a mysterious girl with the power to tear at the fabric of reality – a power her captor thinks will fulfil his warped vision of the American dream. Add-on content from BioShock Infinite is included, featuring the two-part add-on campaign BioShock Infinite: Burial at Sea, featuring Rapture just before its calamitous downfall, ‘Clash in the Clouds’ combat challenges, and the ‘Columbia’s Finest Pack’ and ‘Early Bird Special Pack’ that give you an edge with bonus gear and weaponry;

The physical game contains an 16GB cartridge including the opening acts of BioShock Remastered, BioShock 2 Remastered, and BioShock Infinite: The Complete Edition. Later game contents and add-ons will need to be downloaded. 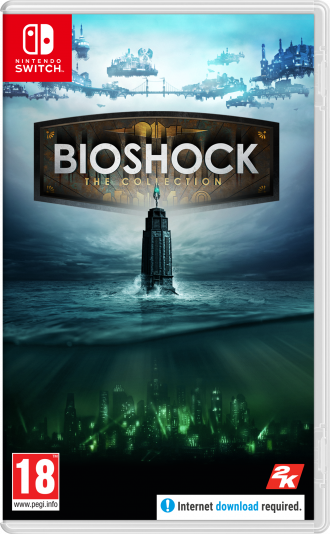