HARRY POTTER WHO IS IT EU

Think you are a Potterhead? In this Harry Potter themed character game each player picks a card then by asking your opponent questions, you have to try and guess which character card they are holding. The difficulty is that they can only answer yes or no!

Everything you need, including easy-to-follow gameplay instructions is supplied in the printed gift box, which also comes in handy for safely storing the cards when the game is not in use. In total there are 72 character cards split into three separate colour-coded packs.

Harry Potter Who Is It is a two-player game and suitable for everyone aged 6 years and over. The first person to guess the opponents' card correctly wins, but be careful as an incorrect guess means an automatic win for the other player. 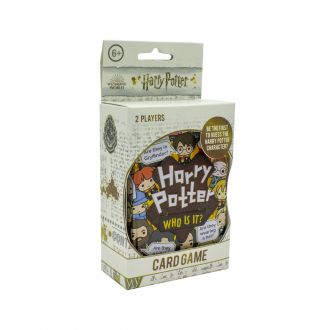